There is a fairly basic Asian Hornet identification exercise available on the following link. This was originally designed for members of all association Asian Hornet Team members but all members are welcome to take the exercise as a means of increasing awareness of the Asian Hornet. It can be found at the BBKA wesbite: https://www.bbka.org.uk/asian-hornet-action-team-map

The Asian hornet, Vespa Velutina Nigrithorax, has been a growing threat in Europe since its accidental introduction to SW France in 2004. From there it has spread to 8 EU countries and is set on further expansion. It was previously believed that the species would not be able to survive in the north of the UK due to colder winters, but is proving to be highly adaptable even in cooler zones.

To date (4th April 2020) there have been 17 confirmed sightings in England. 9 nests have been destroyed. All of these have been genetically tested and proven to come from French colonies. So far, to the best of our knowledge, there have been no successful colonies established in the UK. It is quite a different story in the Channel Islands. There was a national Asian Hornet conference held in Warwick which we attended. There were experts presenting their own experience of the Asian Hornet from the relevant authorities in the UK and Jersey, as well as researchers from Spain and beyond. Their advice is to hold off the Asian Hornet for as long as possible because there is some hope in developing counter measures. ‘Holding off’ may well give us time to develop a successful method of eradication.

Why should we be concerned?

The honey bee is a favourite food source as a beehive provides a ready-made larder, and is a convenient food for the demands of a thriving Asian Hornet nest. Beekeepers with many colonies tend to suffer less than those with a few. But all other pollinators are prey too. The overall effect of such predation, and an exponential expansion of the species into new territory without check, has had devasting consequences not only on beekeeping/honey production but also to biodiversity and agriculture.

About the Asian Hornet

It is known that the new ‘foundress’ queens can travel up to 200 kilometers in search of new territory. They can also be transported accidentally by boat, car, camper van or lorry. So, in other words, they can, have done, and will, appear anywhere in UK – not just on the south coast.

Beekeepers will most probably be the first to sight them, but some of the sightings have been by the general public. It is essential that we are all aware of the appearance and life cycle of the Asian Hornet – and to keep vigilant.

Early in the year it might be possible to see evidence of last year’s nests high up in trees before they are hidden by new leaves.

From mid-February onwards, (depending on temperature), primary nests will probably be started in woodsheds, barns and hedges – quite low down. As the year progresses hornet workers will be evident on flowers searching for nectar, and later in apiaries predating on honey bees. Secondary nests are usually sited high up in trees.

Once established they can spread exponentially in a similar way to our own wasps and hornets. Only the queen survives the winter. One nest can produce hundreds of queens in the Autumn which can in turn, mate, survive hibernation, and found new colonies in the Spring. There is a high death rate amongst these queens but even if only 5% survive this can mean the creation of 10-20 colonies from the original. 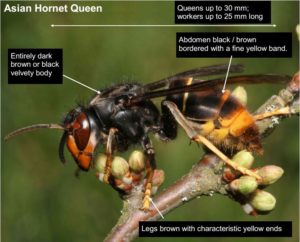 Visit Beebase (The National Bee Unit website) for further guidance and updates on the Asian hornet where you will also find very useful images which are available for identification purposes and downloading.

Spring traps (dry monitoring traps). It is important to monitor these on a daily basis and to release native species. Culling native species gives advantage to the spread of the Asian Hornet.

Autumn traps ( drowning, liquid traps). These trapped insects will be workers and drones at the end of their life cycle and about to die anyway. If queens are caught they will reduce the number of colonies started in the following Spring).

It is very important and useful to understand the life cycle of hornets and wasps at this point.

Shipston Beekeepers recommend their version of the AH trap which is much simpler than the one promoted by the NBU.

There are 2 types of trap – dry and wet, (drowning trap). Both use the same principle – a litre plastic water bottle with the top quarter removed and inverted to sit in the top. Then a simple roof is attached to prevent water ingress, and the trap placed in a warm place so that the bait can be detected by the insect. The roof must be dark/black on the underside to deter escape. It is claimed that a yellow rooftop attracts the insect. There are many variations, and some are much simpler than others. Photo of our design below.

The DRY TRAP (for use in the Spring) is a normal wasp trap with a removable container (sweet corn can or similar) within. This contains the bait and is covered by a gauze and rubber band to prevent entry of the insect. 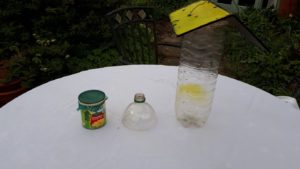 The bait will vary throughout the season.

Spring – a sweet bait such as jam and water in an inaccessible container, (covered with gauze); or a commercially available product such as Suterra.

The WET TRAP (for use later in the Summer) is identical, but with the container removed, and can therefore be used for both. 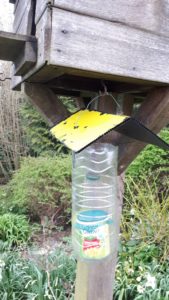 But if you need a challenge you can always see how to make the NBU monitoring trap here on YouTube  !

We can’t emphasise enough that indiscriminate trapping must be avoided. The Asian Hornet is not yet established in the UK. If we use wet traps, especially in the Spring, we will catch a very high proportion of native species in proportion to the very occasional Asian Hornet queen. Dry traps are therefore recommended at this time. They must be inspected on a daily basis and native species released. Insects do not survive for long in these traps, especially in warm weather. Siting the trap near your house will facilitate daily inspections.

An alternative idea, much practised in France, is to use a bait station to monitor for the emergence of Asian Hornet queens in the Spring, (March/April). This is a source of sweet substance made available openly in an easily observed place so that emerging queens can be seen but not trapped. Insects are free to come and go. One possibility could be to buy a stick on, transparent bird feeder which attaches to the window. These can be obtained online quite easily.

Any suspected Asian hornet sightings should be reported to:

When emailing, please include your name, the location of the sighting and, if possible, a photograph. Please do not put yourself in any danger of getting stung when trying to take a sample or photo. Only clear and identifiable photos will prompt a response from the authorities. They are bombarded by many false reports every year and only have very limited resources. They will not investigate without good evidence, (which is where your local AHAT might be able to help).

These hornets as a rule are only aggressive near their nests.

If there is the possibility of capture, the hornet should be frozen to cull, so as to facilitate identification and DNA testing later .

Please note that it is an offence to release an Asian Hornet unless you are authorised to do so.

This app is essential for GPS location of sightings and for very good information about the Asian hornet and images enabling accurate identification.