An Asian Hornet nest was been found and destroyed near Drayton Bassett in Staffordshire. The find was as a result of a member of the public reporting an Asian Hornet.

This was the second Asian Hornet reported in the UK in 2019. The first was at New Milton in Hampshire in July again spotted by an alert member of the public. 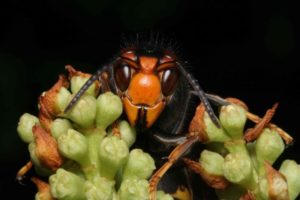 As the leaves fall off the trees at this time of year disused or even active Asian Hornet nests may become visible. All such sightings should be reported to: alertnonnative@ceh.ac.uk

The Staffordshire find is right in the middle of the landmass of the UK. It is known that in France Asian Hornets follow water courses when they expand their territory and there is a large body of water very close to the location.

The Canals and River Trust is asking its members to be alert and anyone taking a walk along a river or stream can keep an eye out. The authorities ask for photographic evidence – they do not want you to attempt to capture an Asian Hornet.

The easiest way to do this is to download the Asian Hornet Watch app on your phone.

Developed by the Centre for Ecology & Hydrology (CEH) the app has lots of clear photos of Asian Hornets and the species that are most often misidentified as Asian Hornets. If you see what you think is an Asian Hornet take a photo and upload it to the app which records GPS details of where the photo was taken and then send it to the alert non native teams at the email above which is built into the app.