The wasps seem to simply ambush the bees once they come out. And indeed a lot of the wasps make it in the hive, especially early in the morning.

Quite worryingly I have not seen the queen for over a week, and while there was some brood hatching, I have seen no signs of recent laying.
And the honey stores are looking dire.

The colony dealt with some lesser wax moths earlier in June, but I have seen no further signs during August. Also, no signs of varroa mites or any other diseases.

It’s a young colony, from a swarm I got from Chris end of May. We might try and merge if with another swarm.
I’ll look further into decoy entrances. 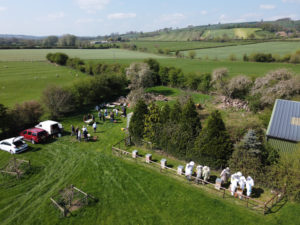